Wars and conflicts are never a good thing directly, even in the case of a city like Berlin, one can still see some indirect implications from the city being divided for such a long time.  Now, often the implications of war and dividing cities and countries are obviously not good, but the one thing that can be indirectly linked to the city being divided is that the rent prices and living expenses have not risen as fast as in some other areas of the country. Why I bring this up is that I have recently gotten the pleasure of enjoying rooftop parties at my friends place, or their “commune”, if you will. For some people rooftop parties might be an everyday thing, more common than the usage of “like” as a substitute for commas in the speech of some unnamed nationalities, but for me they are still a rarity.

In Finland the only people that can afford rooftop apartments with massive terraces, are usually the people who do not have to look at the floor level shelves at the supermarket when going shopping. Here in Berlin, “regular” people can afford to enjoy the luxury of seeing the sun set far away, creating silhouettes of the city on its way down, atop your own apartment. Even though, it is still very possible to live in a rooftop apartment, there are not enough of them to go around for everyone. However, with good luck you might know someone who has a rooftop terrace place, as I did.

It wasn’t the first time I visited my friends pad, but it was the first time I remembered to bring my camera with me. Even though the night started to fall upon us nearly immediately as I had arrived to the rooftop, thanks to my swift moves and fast camera handling, I was able to capture a couple of these “rooftop moments” onto my camera, before the fat ball of fire that we nickname the Sun could fully dive behind the skyline.

We noticed with my friend,after jumping a fence to another rooftop (for a better pic) that the party seemed to follow us and that we had unintentionally created a gathering of amateur photographers on the roof of a curious neighbour, probably wondering why he hears noises of shutters clicking and people laughing through his roof. Nevertheless, everyone behaved and did the same as we, took memories of this great city that one cannot buy from a gift shop at the Brandenburg Gate.

Once again this Saturday had given me yet more reasons to contemplate on staying in Berlin even longer than merely till the end of this, seemingly short, year. 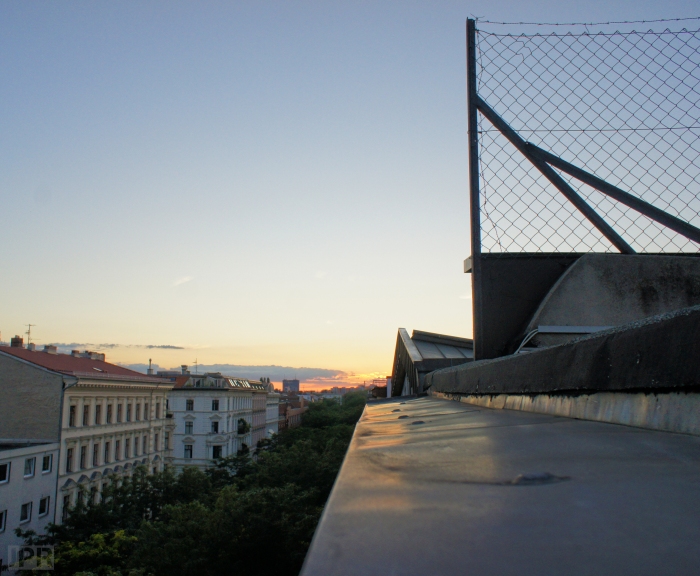 A Self-proclaimed Philosopher View all posts by IAMJPR