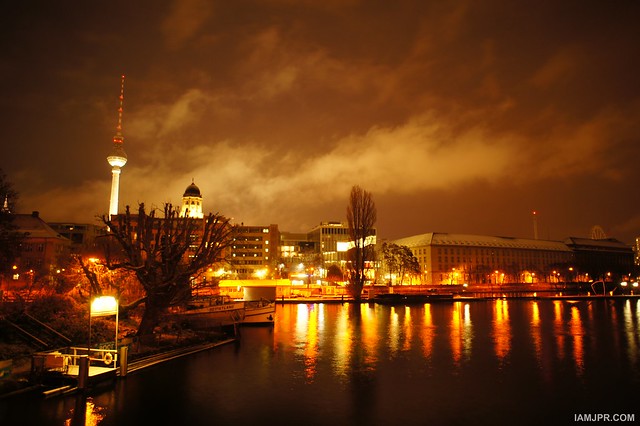 I have always been a fan of playing with the shutter of the camera, so as to have flashy pictures, however, I have previously only taken such pictures of motorways and intersections.  Today, as I went for my evening walk, I took along my camera and I’m glad I did. I walked for a good hour and by accident ran into an area between a couple of train stations; it was the perfect place to kick-start the winter, photography-wise. Obviously, the scenery is not that “winterish”, but I am still happy with the shots I got of the S-bahns that flew by the bridge where I had setup myself to shiver in the cold and lie in wait for the trains. Next time though, I’ll take an umbrella with me…

A Random Moment From Prenzlauer Berg

When this year started I had a lot of time on my hands. I had just moved back to Finland and returned from my awesome internship to the not so awesome classrooms once more. The following months I would be occupied with my thesis (which if anyone is interested in a 50-page sleeping pill, you can find it here ) battling, struggling, trying to find my way, always seeming to lose time that I shouldn’t lose! I wanted my thesis process to be over so bad, that I wished I could’ve just skipped into June from January. Now when I look back at my spring, there isn’t a single day I would skip.

Sure, my spring consisted of days that were pure agony, due to having to just in front of a laptop writing my thesis or doing research, however, those days also often included having the casual beer at a local pub with my friends. The moments I had those beers, took probably an hour or two out of the day, but occupied a place in my mind for ever. I have so many good memories and moments from last spring that I would not ever want to skip over, even if I could. Heck, if I would have leaped forward to summer, I wouldn’t have even met as awesome of a person as I did on one cold February night, not to mention the many other encounters that wouldn’t have taken place. I would have been more mad at past me for skipping the spring, than anyone has ever been at any referee at a soccer game.

It’s only when looking in the past, do we often see the value of that particular time. Of course, there are a lot of bad times and things you wish you could jump over, but for most of us, in those seemingly bad times, when looking back at them, there is always something good as well. I especially, have a tendency to think too far ahead and thus stress about things that I cannot influence. When I constantly just think about the upcoming things and where I would want to be, I forget to live in the current moment and those are the moments you will never be able to relive.

I think everyone should just stop, take a second to think about this very moment and then enjoy it.