It is not so much that I want to create a nice picture, but rather that I wish to show you what I see.

I know, after 1 usually comes 2. BUT this time around I want to break the chronological order here on my page.  Not that I would be the first one to do so in the history of the Universe. Heck, one could argue that George Lucas didn’t know how to count either.  Nevertheless, this video is again a glimpse into my trip to Canada. Montréal to be exact. I enjoyed the city and from the start it had a very European feel to it (and not only temperature-wise), being bilingual and all. So without further ado here are my first steps in the City of the Saints.

I’ve always had a strange interest towards Canada, as if I knew that I’d really like it, even when I hadn’t yet been there nor met a single Canadian. This Autumn I happened to get the chance to take some time off, so I decided to finally tick this country off my bucket list. And I am happy that I did. The three weeks spent on both coasts were beyond great. I did my best to document some of my trip, with my freshly bought GoPro. I manage to gather a good amount of footage, but as all of you who’ve ever dabbled with editing know, it takes a nice chunk of time to actually get the editing done (well at least for me heh).  Nevertheless, now I finally managed to finish the 1st part of (hopefully) a more extensive video series, which I also thought I’d share here. So here you go. The short intro to my trip to the land of the maple syrup and Hockey. 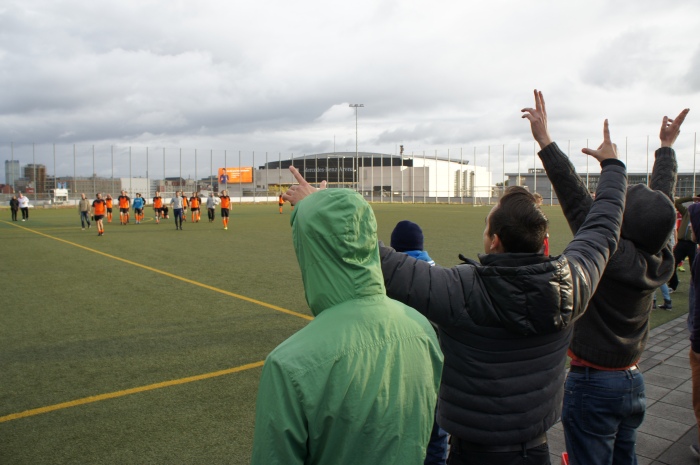 I’ve lived nearly one fifth of my life in Germany. Crazy how time flies. Oddly enough, on most days it doesn’t even feel like I live in Germany. At work I used English, at home, well, I just speak to myself and most of my friends are non-Germans hence the lingua franca is English when we gather to socialise with each other. But the moments when I do remember I live in Germany (which I’m happy about btw) are the moments to do with Football. Never have I seen a crowd erupt like they did when Germany won the World Cup a few years back (see post) or when a second league team (St. Pauli) scores a goal against a random team in a seemingly meaningless match on September Monday. Moreover, what Hockey is to the finns (debatable yes..) is Football to the Germans.

Last year, one of my best friends invited me to join for a beer at the pub of their football team, THC Franziskaner FC (yes, they have their own pub as an amateur team – how nice is that?) If anyone says Germans can be a bit standoffish, well, they’ve clearly never been to a football pub. Even though, the last time I kicked a ball was probably in High School, I was welcomed with hugs and handshakes, as if by friends who I had known for ages. You can sense the camaraderie, similar to that of what arguably I felt during my hockey times or even in the military.It’s this friendliness that’s made me become a regular at the events of the team.

Yesterday I joined the guys at their game and saw it as an opportunity to also catch a few photos in the mix. The game was played on top of a wholesale store (Wallmart size) and as one can imagine, it was windy up there. There was a good crowd of supporters of the team and also of the opposing “Spartans”, with one heckler amongst them being the loudest, trying the hardest to amuse and also throw the opposition off their game. “Franziskaner THC” chants echoed, as the game went on in true football weather, with sunshine one minute and rain the next. The Game was entertaining (I’m a Finn, so what would I know about Football right? ) and the atmosphere was fun and warm, even if my hands begged to differ by going numb from the chilly wind. I managed to get a few decent pics also during the match, before the fresh autumn weather killed my battery. The Boys in Orange were able to fight off the Spartans for the a good chunk of the game, only during the second half giving up a goal or two, which eventually cost them the game. We often have heard when playing amateur sports, probably from our parents, that winning isn’t everything and if as a kid I merely took those words as just something moms and dads say when you’ve lost a game, now more than ever I felt it was indeed, nearly all the same, whether the guys won or lost on the pitch. It was secondary. Of course, you play to win, but the feeling on the pitch and in the stands was the “win” of the day. Regardless of seeing the ball go into the net or not, everyone had fun and got their fair share of laughs that day.

Now I, as mentioned am not a footballer, but I still felt almost a part of the team whilst watching the guys sprint after the ball and us cheering them on. It was fun. If at times I forget that I live in Germany, this was definitely the moment where I remembered that I was indeed living in the capital of a country that loves its Football. And it is these moments, that I am lucky to be able to be a part of, since for a short moment I don’t feel like an “expat” living in his own little English bubble, but I feel like just one of the guys, chit chatting about football (in German) and having laughs about bad calls by ref and the reactions of the opposition. Who knows, given the progression of my interest for Football, maybe one day I too will take a turn at kicking the ball, but for now I’ll make due with shooting with my camera from the sidelines.

IAMJPR
Create a free website or blog at WordPress.com.